“There’s this feeling that entrepreneurs are born and not made. And that is, by and large, completely incorrect.”

We can’t all be the next Bill Gates. And maybe that’s not a bad thing. You might be surprised to learn that emulating the way famous founders grew their companies could be the wrong approach to starting your business.

It’s a common mistake Wharton Management Assoc. Prof. Ethan Mollick sees young founders make. That’s why he’s made it the focus of his new book, “The Unicorn’s Shadow: Combating the Dangerous Myths that Hold Back Startups, Founders, and Investors,” published by Wharton School Press. Mollick shared his thoughts on common myths he sees in the world of entrepreneurship to separate fact from fiction.

“Entrepreneurship has historically been full of myths because we haven’t had data (about what works). People have been making decisions based on gut feelings, intuition, and trying to match patterns. Some of the patterns they’ve been matching have been those of very successful past founders. But the problem is that those successful past founders tend to look very similar to each other. They’re often male, young, college dropouts with a technical background — think Bill Gates or Mark Zuckerberg. The research shows that (this idea) is not the best, only model, to be a founder. As a result, people who might otherwise enter entrepreneurship are discouraged because they look at founders who are famous and who they see in the movies, and they don’t resemble those people. (That leads them to believe) that they can’t be founders. But the evidence shows that that’s not right at all.”

2. Pave your own path to success.

“A ‘unicorn’ is the nickname for a private company with a valuation of more than $1 billion like Uber and Airbnb. All these pre-IPO companies are unicorns. Because these unicorns are the public face of (…) a rock star in the entrepreneurial world, they have an outsized influence over the entire industry. They cast a shadow in their own shape over everything else. People want to be like these companies and they find themselves emulating these organizations. Now the research shows that not only does emulating these approaches usually not lead to success, it also discourages a lot of people who might otherwise enter entrepreneurship because they don’t see themselves as being in the mold of these unicorns.”

3. Improve your company by growing your skillset as a founder.

4. We know crowdfunding works, but we still don’t know how to close the gender gap when it comes to fundraising.

“(In terms of fundraising), it turns out that when large groups of people get together to make decisions, they are actually pretty rational decisions. They also tend to reward risk-taking. (If) you just asked the experts, they’re more conservative and less likely to fund really interesting, innovative projects that the crowd will.”

“On the downside, I — and a lot of other researchers — have been looking at gender gaps in entrepreneurship, especially the persistence of funding gender gaps and why women receive much less VC than men. Those have proven to be amazingly stubborn and persistent across many different measures, different cultures, and different approaches. And I think we’re still trying to untangle the problem and offer better solutions.”

5. A company is more than its founder.

“I think that the secret story of the success of entrepreneurship is not the lone genius who comes up with an idea. It’s the manager who builds a team, who successfully leads an organization, and who considers strategy and finance. It’s all these other pieces. At Wharton, we’re one of the top business schools, so we teach students how to do those kinds of things. Those skills are valued in startups just as much as they are in the corporate world.”

“There are lots of successful entrepreneurs who will tell you their gut feelings about how they succeeded. There are lots of successful and very persuasive venture capitalists who have written manifestos on what it takes to run a startup company, and they have active Twitter accounts that are full of information. But that’s based on wisdom. That’s based on one person interpreting the experience of their success or the successes they’ve seen.”

“Our research shows that most of those interpretations aren’t correct. If you actually interviewed people about why they failed their company and then compared that to the real reasons, there’s a huge gap. People tell stories that are not necessarily related to what actually happened. (It’s taken off) in places of academia, but especially here at Wharton, (there’s) a revolution in empirical analysis of entrepreneurship.”

“Entrepreneurship is the engine for the growth of the economy. Basically, all new jobs come from startups. New ventures are the key to economic growth. They’re often the key to individuals raising their socioeconomic status. And talent is everywhere. We have a big world full of talented people, but opportunity is not well distributed. The flip side of Wharton being one of the best places in the world to start being an entrepreneur is that it’s really easy to start a company from Wharton. It’s less easy if you don’t have access to the resources, education, and connections here. One of our big missions at Wharton, and one of the big missions with the book, is to try and take what we know about entrepreneurship and make it accessible to more people. Democratize opportunity; not just democratizing the ability to start a company.”

About the Book (Out Now) 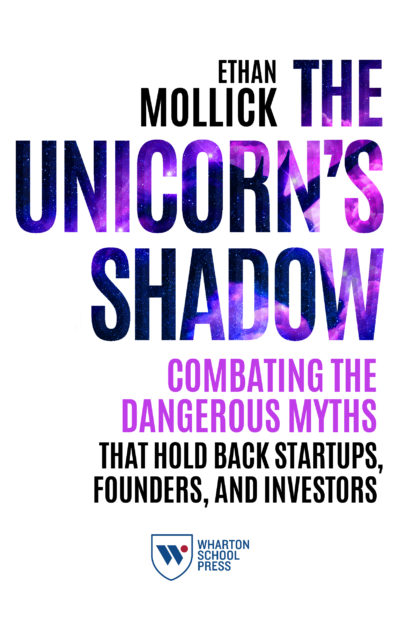 When you think of a successful entrepreneur, who comes to mind? Bill Gates? Mark Zuckerberg? Or maybe even Jesse Eisenberg, the man who played Zuckerberg in The Social Network? It may surprise you that most successful founders look very different from Zuckerberg or Gates. In fact, most startup origin stories are very different from the famous “unicorns” that have achieved valuations of over $1 billion, from Facebook to Google to Uber.

In The Unicorn’s Shadow: Combating the Dangerous Myths that Hold Back Startups, Founders, and Investors, Wharton School professor Ethan Mollick takes us to the forefront of an empirical revolution in entrepreneurship. New data and better research methods have overturned the conventional wisdom behind what a successful founder looks like, how they succeed, and how the startup ecosystem works. 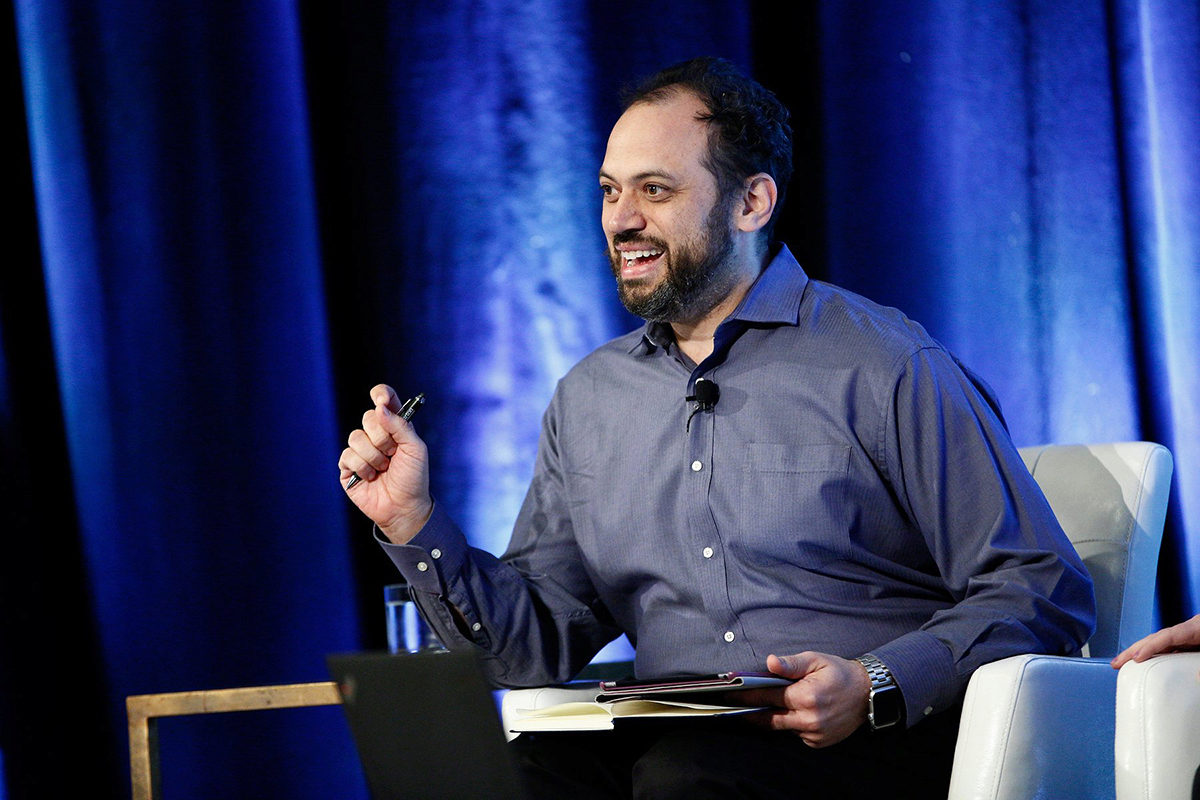 Ethan Mollick studies innovation and entrepreneurship, with a special emphasis on how to give everyone more opportunities to be innovative and entrepreneurial. His papers have been published in top management journals and have won best paper awards from multiple divisions of the Academy of Management. His work on crowdfunding is the most cited article in management published in the last five years. Mollick is a Schultze Distinguished Professor and Kauffman Foundation Junior Faculty Fellow.

Mollick is also the Academic Director and co-founder of Wharton Interactive, which aims to transform business school teaching using games and simulations. He has had a long interest in using games for teaching, and co-authored a book on the intersection between video games and business that was named one of the American Library Association’s top ten business books of the year, and has studied the way that games can be used to motivate performance and to educate. His simulations and games are used by tens of thousands of students around the world.

Wharton School Press, the book publishing arm of The Wharton School of the University of Pennsylvania, was established to inspire bold, insightful thinking within the global business community. The Press publishes a select list of research-driven, award-winning, and bestselling books that offer trusted business knowledge to help leaders at all levels meet the challenges of today and the opportunities of tomorrow. Led by a spirit of innovation and experimentation, Wharton School Press has pioneered a fast-reading business book format that fits your busy life, allowing you to swiftly emerge with the tools and information needed to make an impact.